Revapi has a very simple architecture consisting of a simple linear pipeline that processes a "forest" (a set of trees) of individual API elements.

The API elements come from archives. As of now, the only possible source of archives is the file system (future versions of Revapi may introduce other implementations for different sources of archives).

A set of archives containing the old version of API is passed to an archive analyzer that produces a forest of API elements. Then archives of the new version are analyzed the same way.

The two API forests are then consistently sorted and traversed in parallel. New or missing elements are detected and equivalent elements are compared using an element analyzer, producing a set of reports that contain the differences found while comparing the elements. The differences are then simply reported. 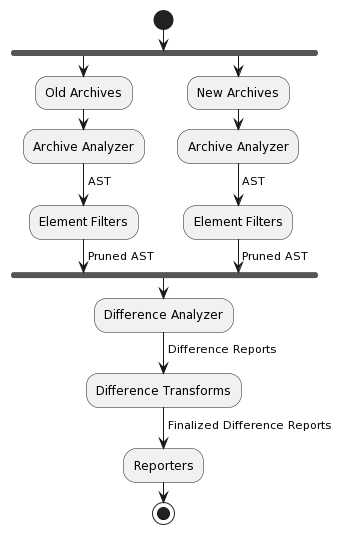 Each of the stages in that work flow is configurable. The configuration is supplied as JSON files, that are validated against JSON schemas that each extension can supply.

The diagram above hints at several extension points available in Revapi.

An archive is a very simple abstraction over a file that represents the archive containing some API elements (like Java’s jar archive or a class file, an XML document, properties file, etc).

Revapi actually doesn’t provide any implementation of it on its own (only the standalone Revapi’s CLI contains a private implementation able to read from files) but it is trivial to implement one.

An API analyzer (which is kinda implicit in the diagram) is the main interface for implementing API checks for custom "language". It provides and configures the analyzers of the archives and API difference analyzers both to be detailed below.

An archive analyzer is instantiated and configured by the API analyzer to analyze archives of a version of API. It represents the results of the analysis as an element forest (i.e. a set of element trees).

The magic happens in the difference analyzers. Revapi simultaneously traverses the two element forests discovering new or removed elements and matching the comparable elements in them (using a co-iterator). It then passes the matched pairs to the difference analyzer that performs the actual analysis of changes and provides the reports summarizing them.

A report summarizes the differences found between 2 elements - one from the old API and the other from the new API (accounting for removals or additions by one of the pair being null).

In addition to the two elements in comparison, the report also contains the list of the differences the analyzer found between the two.

And here are the severities of differences:

Apart from this classification, a difference also defines its criticality. This expresses how severe the change is regardless of the severity under different compatibility types. This is meant to be supplied mostly through the configuration by the library author and should give the user the information about how severe the change is perceived by the library author or how critical it is for the results of the current analysis (this may be configured differently for build-time analysis or for report generation).

A criticality is identified by its name and has a level associated with it. The higher the level, the more critical the criticality is. There are 4 predefined criticalities:

The criticality is not generally assigned directly by the difference analyzer. It is meant to be assigned by the user that configures the analysis through configuring difference transform extensions to assign the criticality based on some criteria.

The recognized criticalities can be configured in the pipeline configuration where one can define a completely new set of criticalities known to the analysis or just augment the levels of the default ones.

Once the differences are found they are supplied to the difference transforms. These extensions can, as the name suggests, transform the found differences into different ones or altogether remove them from the results.

You can spot in the explanation above that there is a good chance for an infinite loop if two or more transformers form a "cycle", meaning that a difference that produced by one transformer is changed again into the original by a second transformer, which again is transformed by the first transformer, etc.

Revapi guards against this simply by doing at most 1 000 000 such iterations and then throwing an error.

What is this good for?

You can notice that it is hard (read impossible without transformation blocks) to "prepare" differences using one transform and then produce the final difference using a different transform.

So, how would we use transformation blocks and how would we configure Revapi to only consider binary compatibility?

Let’s use Maven for our example:

What have we done there? The analysis configuration looks "normal". We enable the revapi.semver.ignore extension and leave it with the default configuration. We additionally configure revapi.reclassify to tone down any difference (with any code, by using .* as the regex to match any difference code) to EQUIVALENT, effectively "switching them off" for all compatibility types but BINARY.

The new thing is the pipelineConfiguration. This tells Revapi to group the two transforms together and consider them as one - the "output" difference of revapi.reclassify is used as "input" difference to revapi.semver.ignore and "output" of that is used for the reporting purposes. The important thing is that revapi.semver.ignore never sees the original differences as reported by the analyzer. It only ever sees the differences first transformed by revapi.reclassify.

Finally, after the final set of differences is settled, it is passed to the reporters. These are responsible to report the found differences to the caller somehow (standard output, database, xml files, whatever one imagines).